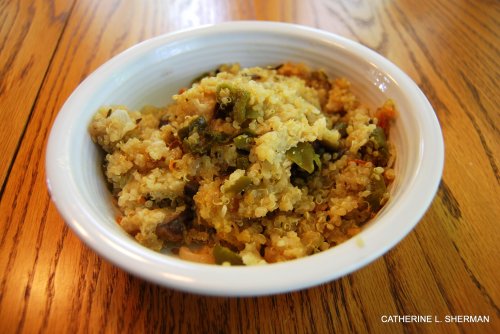 Quinoa was a primary staple of the ancient Incas. It's high in fiber, a good source of iron and has all eight essential amino acids. I made it into a casserole to serve to my book club. They wanted the recipe, so here it is.

Food is an essential part of book club.  The food is always fabulous, and if the members don’t prepare all of the food, they know where to go and what to buy or if they don’t cook which restaurant to suggest to “make a great dinner happen,” as Chris says.

I don’t have a lot of fabulous recipes to share, but the members asked for this one.

To serve eight to ten people, prepare whole grain quinoa (keen-wa) according to the directions, so that you have about eight cups of cooked quinoa.  Mix in four tablespoons of chopped fresh basil.  I also added some snipped fresh rosemary and bronze fennel, because I had it in the garden. I mixed in a teaspoon of garlic salt. You could probably add fresh chopped garlic, but don’t add garlic salt, just plain salt to taste.

Saute four chopped green peppers and two cups of chopped button mushrooms in butter or olive oil.  (I used butter because I had just seen “Julie and Julia,” the movie about Julia Child, and I had butter on the brain.)  Add the sauteed vegetables to the cooked quinoa in a 4-quart casserole dish.  Mix in six ounces of grated parmesan and eight ounces of an Italian cheese ensemble, such as Mozzarella and Romano cheese.  You can probably get away with less cheese.  I made up this recipe so I used the cheese to bind the quinoa, and didn’t know how much it would need.  It held together well.   I used green peppers, because that’s what I harvested from my garden. I also sliced four fresh green beans (my total harvest) and cooked those with the quinoa.  You could add a lot of different types of vegetables.

Bake for 30 minutes for half an hour, although since everything is cooked, you don’t really need to bake it that long. It depends on how crusty you want the casserole to be. It was delicious.  I usually only cook vegetarian food, so this will be added to my repertoire.

Oh, by the way, the books were good, too!

“The Good Thief” by Hannah Tinti and “A High Wind in Jamaica” by Richard Hughes.